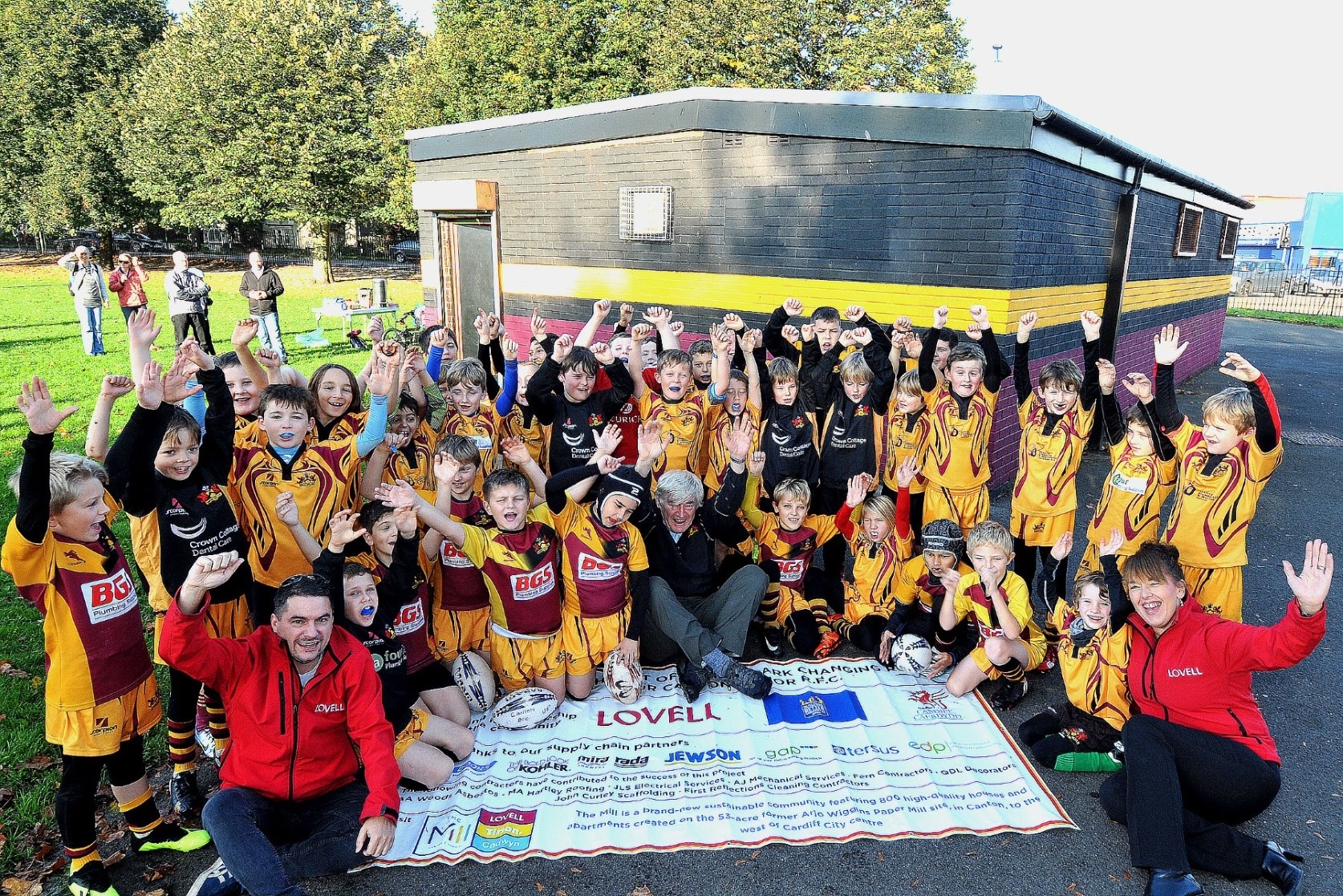 Canton Rugby Football Club officials joined Cardiff councillors and representatives from Lovell at an opening ceremony to celebrate the completion of the extensive renovation programme which has created a brand-new base for the club’s mini and youth teams.

The improvements have totally transformed the building, including installation of a new kitchen, shower room and boilers as well as new lighting and a new roof. In addition, the Lovell team  created a new kit room, replaced all ceilings, refurbished toilet facilities and redecorated the interior in the club colours of yellow, burgundy and black.

All work was carried out for free by Lovell, who also donated the materials used, with the company’s total contribution in the region of £20,000. The company carried out the project with the generous support of a large team of its subcontractor partners while hard-working volunteers from the club painted the exterior of the building.

The Lovell team – who are working very nearby in Canton delivering award-winning new housing development The Mill in partnership with Tirion Homes and Cadwyn Housing Association – helped the club complete the transformation through the company’s community legacy programme.

Club vice-chair Ivor Rodway, who has led the club’s drive to transform the Jubilee Park facilities, is delighted with the new-look changing rooms:  “On behalf of everyone at Canton RFC and especially the mini and youth sections, I would like to thank everyone at Lovell, Jewsons, the subcontractors and Cardiff Council for their help, it will make such a difference to all the youngsters who will be using the refurbished facilities.”

The previously dilapidated Jubilee Park building, which had no hot water and a leaking roof, now houses smart, modern dressing rooms and other facilities for the club’s young players.

Lovell regional managing director Kate Rees says: “This has been an inspiring project to work on and it’s great to see it come to fruition. From our involvement in Canton, where we began work at The Mill, it was clear that the rugby club is pivotal to the local community and particularly the area’s young people, giving them the chance to play regular sport, improve their fitness and get the fantastic life experience that comes from playing in a team.

“When we found out how the Jubilee Park building refurbishment would benefit the club’s youth teams and enable the club to secure its future, we felt it would be the ideal legacy project for us to create in Canton. The new facilities are amazing; we hope the boys and girls enjoy using them and wish them every success in future matches.”

David Ward, chief executive of Tirion Homes, says: “We are delighted to help facilitate this improvement to facilities for the wider community.  We are committed to maximising local benefits in our developments wherever possible through social and economic projects. The new facilities will ensure that rugby will continue to play an important part in the lives of many people of all ages in Canton.”

Chris O’Meara, chief executive of Cadwyn Housing Association, says: “It’s great that local residents get better recreation facilities as a result of the investment at The Mill. Doing something for the whole community will help those living there become part of it.”

One of Wales’ largest regeneration programmes, The Mill is being delivered by a partnership of Lovell, Tirion Homes and Cadwyn Housing Association. The riverside site was acquired and remediated by Tirion with support from the Welsh Government and financial backing from the Principality Building Society. Overall, it will create 358 homes for open market sale through Lovell and 442 homes to rent for Tirion which will be managed by Cadwyn.