The ancient village of Ely is one of Cardiff’s oldest districts, with evidence of habitation in Roman times with the villa in Trelai Park and even earlier at the Iron Age hillfort, Caerau. The area was sparsely populated and predominantly made up of farmland and market gardens, right up until the early 1900s, with local people making a living providing food for the city. Separated from Cardiff by what was then Ely Common (now Victoria Park), the area has historically developed its own independent trade and community. As the City of Cardiff expanded during the nineteenth century, and industry grew, so did the Paper Mill. 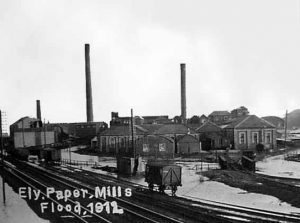 The Mill was ideally situated to harness the swift-flowing waters of the River Ely as both power and raw material for the Mill. Recycling was an important theme even then as the Paper Mill benefited from its proximity to Cardiff and the South Wales valleys enabling it to recycle rags and wood to make paper pulp. The accessibility of Cardiff docks via the railway – which connected the valleys to Cardiff Bay – helped secure the Mill’s position, in its heyday, as the largest paper works in Britain for newsprint. Despite a modest start to the business, it began to prosper in 1889, producing around 150 tonnes of paper a week. By 1892 it employed “400 hands, and seven machines… in almost constant operation”. A significant proportion of workers were women and children – employed for unskilled tasks such as rag-sorting , cutting and dusting.

Business continued to boom into the twentieth century, but the Mill closed in 2000 after over 130 years of business, due to the changing fortunes in the paper industry. For over a decade after its closure the long-term fate of the site remained uncertain. Much work had been carried out in the surrounding areas – particularly to restore and highlight the many historical, archaeological and environmental attractions in the area – however the site remained untouched.

Expansion of the paper mill in the 1970s.

Site Plan of Wiggins Teape Mill, 1st December 1972, showing the buildings situated at the Ely Bridge end next to the river. Ely RAFA Club can be seen on the left hand side.

The redevelopment of The Mill now provides the vital missing link in the picturesque Ely trail, enabling people to appreciate the rich biodiversity and varying habitats along the river from St Fagans to Cardiff Bay. It reconnects the village to Victoria Park and Cowbridge Road East and beyond and, with the completion of the footbridge across the river, opens up a direct route across the river to the spacious Trelai Park and its (as yet un-excavated) Roman Villa.

We’ve already started exploring some of the history of area; talking to people who worked at The Mill, lived in the area or have an interest in local history and by visiting the Glamorgan Archives. It’s a fascinating journey – of a changing Cardiff, changing industry and employment and a changing way of life. Our Memories of the Mill project will continue throughout the development as we acknowledge The Mill’s heritage throughout the site – particularly in the riverside park and at the community facility. We’re always open to ideas on how we can do this creatively so please get in touch with us at The Mill Living with any suggestions.