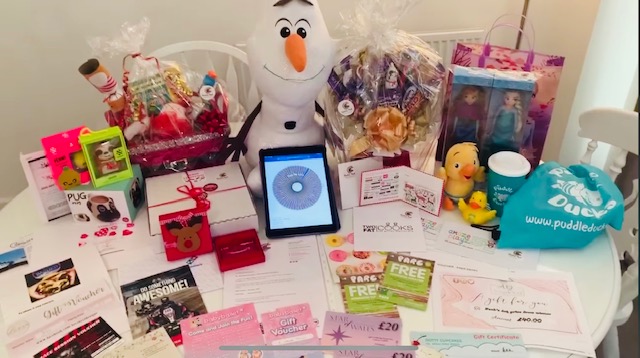 A resident at The Mill raises over £2,000 for local charity over Christmas

A resident living at The Mill in Canton, Cardiff has helped to raise over £2,000 for Noah’s Ark Children’s Hospital Charity.

Based in Wales, the Noah’s Ark charity works with the NHS to provide the Noah’s Ark Children’s Hospital with state-of-the-art equipment and facilities, helping it become one of the best children’s hospitals worldwide.

Alicia, 30, worked hard to raise funds for Noah’s Ark, which she selected due to families ties with the charity.

During the Christmas period, Alicia hosted a virtual prize draw on Facebook which raised £1,500 alone.

Alicia also sold charity merchandise and requested donations from the public and other residents at The Mill in order to raise money for the children’s charity. Lovell, Cadwyn Housing Association, Tirion Homes and Principality Building Society all donated to the cause, and the school that Alicia’s children attend also donated £150.

Alongside raising money, Alicia collected gifts for the hospital itself. People across Cardiff donated essential items, like baby monitors, as well as toys which could be used on the ward, providing patients with a Christmas gift.

“I’m so proud to have been able to raise over £2,000 for Noah’s Ark; after such a difficult year for everyone including the charity and the loss of many fundraising events, it’s an incredible amount to be able to donate.

I’d like to thank everyone who supported me, all of the wonderful businesses who offered prizes, my family and also the surrounding community. As a family we’ve received wonderful care from the children’s hospital and benefited from the facilities that the charity provides, we’re delighted to be able to offer them support in return for all they’ve done for us and many other families across Wales.

I had hoped to arrange an event for residents, in which Santa and his reindeer would come to visit, but due to the lockdown in Wales this is something we’re looking to plan for this Christmas instead.”

“We’re so grateful to Alicia and her family for coordinating such successful fundraising. She’s worked so hard to bring the community, local school and businesses together, for the benefit of children and families at the hospital. As with most charities, 2020 has been a very tough year and we are more grateful than ever for Alicia’s support. We hope that this relationship continues for many years to come.”

“We’re thrilled to have donated to Noah’s Ark through Alicia’s fundraising. Alicia put in so much hard work to raise significant funds and I applaud her for all she has achieved. There is a real sense of community at The Mill and we’re delighted that residents were able to come together to donate to such a wonderful cause”

“We are delighted to have supported Alicia and donated to such a worthy cause as Noah’s Ark. Alicia worked tirelessly to organise and run things and despite the pandemic affecting her plans at the last minute for the Christmas event, Alicia has still been able to raise over £2000 and book the event for next Christmas as something to look forward to for all the residents.”

“We are delighted to have contributed towards this very worthwhile Charity. Special thanks go out to Alicia and her family who have been instrumental in encouraging residents to virtually participate in raising funds through the festive period and help raise this huge amount of money.”

“’The fundraising efforts from Alicia and the residents at the Mill show the real community spirit there. The virtual prize draw was a great way for the residents to virtually come together and raise money for the incredible charity Noah’s Ark. We look forward to supporting the Christmas fundraising event this year.”

The Mill is creating a new community in Cardiff by bringing 800 homes to the former Arjo Wiggins paper mill site. They include 358 homes for open market sale by Lovell and 442 homes for rent – which will be managed by Cadwyn Housing Association – for Tirion Homes. The scheme is going ahead with the support of the Welsh Government and financial backing from the Principality Building Society, and is being developed by Tirion Homes in partnership with Lovell.

For further information on the homes available at The Mill, visit www.mill-canton.co.uk or call the sales team on 02920 601 598, or contact Tina Wilson at Tirion Homes on 07392 086726 or tina.wilson@tirionhomes.co.uk / www.tirionhomes.co.uk.